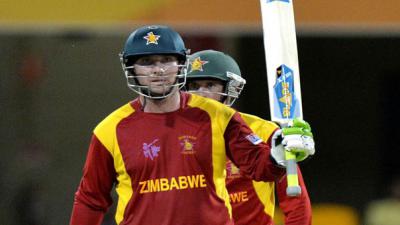 BRISBANE: Zimbabwe wicketkeeper Brendan Taylor said he couldn´t comprehend his team´s 20-run loss to Pakistan at the World Cup in Brisbane on Sunday.

After restricting Pakistan to 235 for seven, Zimbabwe appeared well on track as Hamilton Masakadza (29), Taylor (50) and Sean Williams (33) dominated the Pakistan attack.

But some soft dismissals handed the momentum back to Pakistan, who went on to record their first win of the tournament and keep their hopes of qualifying for the quarter-finals alive.

Taylor said Zimbabwe had targeted this match as one they could win and said they had only done half the job.

"We certainly did target this match and we felt that half the job was done particularly well by restricting them to 235," he said.

"But they came out in the first 15 overs and made it pretty difficult for us (to score runs).

"We needed a partnership but unfortunately 50 and 30 run partnerships won´t get you over the line.

"It is extremely difficult to comprehend this loss."

Taylor said the experienced batsmen, including he and Williams, had to shoulder much of the blame.

"We both felt like we were cruising nicely but again we found ways to get out at crucial periods -- some soft dismissals as well," Taylor said.

"That´s been a major downfall for us in the last four games, crucial periods when batters have needed to get through those initial periods, then finding ways to get out.

"It´s not helping the team´s cause."

The 29-year-old said Zimbabwe still believed they could reach the final eight, despite having to play tournament heavyweights India in their final pool match.

"It´s definitely a little more added pressure -- we feel we are 80 per cent there," he said.

"We think if we can close that gap a little bit more I think we are heading in the right direction for a good win against Ireland.

"If we can do that, India have been on the road a long time, but we saw what happened at Eden Park the other day (when New Zealand beat Australia).

"If we can play some fantastic cricket then there is no reason we can´t have that self-belief that we can win."

Zimbabwe captain Elton Chigumbura will have scans on his injured quadriceps on Monday. (AFP)