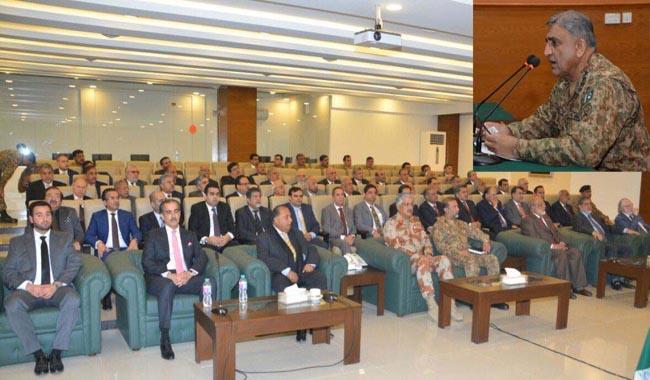 KARACHI: Chief of the Army Staff General Qamar Javed Bajwa on Thursday assured the business community of Karachi that the metropolis would be purged of terrorists, Geo News quoted Zubair Tufail, the president of  Federation of Pakistan Chambers of Commerce and Industry (FPCCI), as saying.

According to Geo News, the army chief was talking to a delegation of traders and industrialists, which met him during his visit to the metropolis.

The delegation apprised the army chief of their problems and complained that the Sindh government was not fulfilling its responsibilities properly, the TV reported. “Karachi has been turned into filthiest cities,” one of the participants was quoted as having told the army chief.

The army chief said law enforcement agencies would continue their work to bring peace in Karachi, adding that traders and industrialists were the backbone of Pakistan’s economy.

“Kci (Karachi) Business Community interacted with COAS.He reassured them that business & investment in Kci will cont to benefit from improved security,” said military spokesman on twitter.

Kci Business Community interacted with #COAS.He reassured them that business & investment in Kci will cont to benefit from improved security pic.twitter.com/3Rl8VlM1kD

The military spokesman said the army chief lauded Rangers and law enforcement agencies for restoring normalcy and said the army would continue to support all govt institutions involved in Karachi operations.

Chaudhry says it was not PML-N that won, but the PTI that lost the Daska by-polls

'Entire nation to celebrate Eid on the same day this year'